This blog is dedicated to Mr. Bentley, our little buddy who crossed over the Rainbow Bridge earlier this year. Thank you, Bentley, for bringing so much joy to our lives for the six lucky years we spent with you. You are loved and missed, and can never … 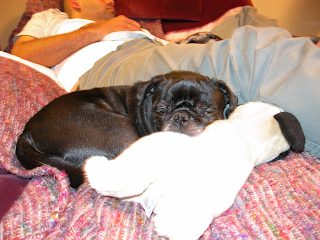 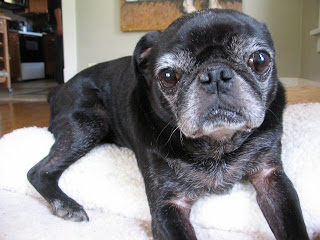 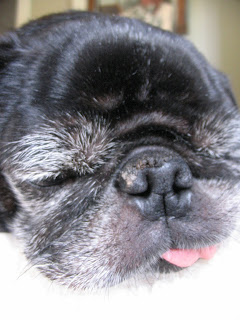 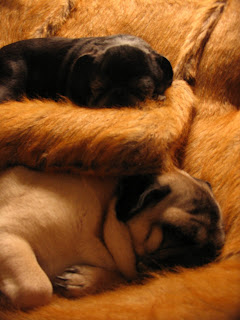 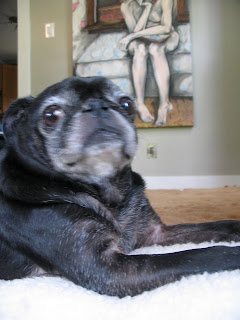 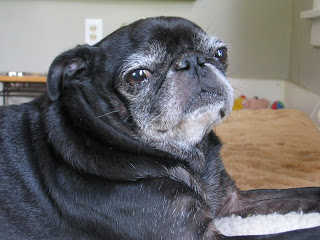 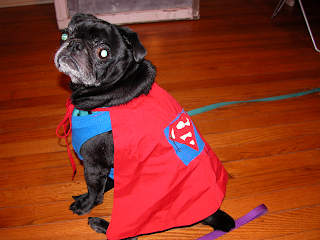 This blog is dedicated to Mr. Bentley, our little buddy who crossed over the Rainbow Bridge earlier this year. Thank you, Bentley, for bringing so much joy to our lives for the six lucky years we spent with you. You are loved and missed, and can never be replaced.

Here is our youtube video of Mr. B: http://www.youtube.com/watch?v=XMWXQnjqre0

And here is the tribute that Sam wrote for Bentley after his passing in April 2008:

When Carol from our pug playgroup sent an e-mail about a pug that needed rescuing, we had no idea what we were getting into. Sure, there was that video that showed a small black dog spinning like a top and barking like a madman. He was a force of nature, a miniature tornado, but we wanted to help. So, with Carol’s assistance we arranged to take Bentley in.

He was a mess. He was already missing several teeth and our vet noted that he needed a few more pulled out. On top of that, it was obvious he had been abused.

The first few months we had him we had to hand feed him because he wouldn’t eat from his bowl at all. He would stare down at his bowl and start growling as though someone was going to come take his food away. It would take us half an hour or more to feed him kibble after kibble in this manner.

After some time, he was finally able to eat food from a bowl, but it was perhaps several months after that when we noticed a change in Bentley. We think it was because of Kiko, our other dog. It’s the only explanation that makes sense. Bentley started playing with toys.

Once he started playing, his real personality came out from under the years of abuse. He greeted us daily with his excited yowl, hopping on his two forepaws, ears flapping up and down.

He’s been with us for nearly six years now. When he first entered into our lives, the vet estimated that Bentley was between eight and 10 years old. So, he was already an older dog, with older dog problems. Those problems were compounded a couple of years ago when Bentley slipped a disc in his back.

It didn’t seem to hinder Bentley much, if at all. Sure, his gait was a little more wobbly, but he was still playing and bounding around as if nothing had happened. Then, the first episode occurred. His hind legs wouldn’t move as if he were paralyzed. Steroid shots seemed to do the trick, and he was back again, bounding around the house as if he owned it.

Unfortunately, as Bentley got older, steroids and anti-inflammatories were no longer enough to stave off the pain. Over the last couple of months, his quality of life deteriorated to the point that we had to keep him in his crate except during meals and bathroom breaks for fear that he would hurt himself trying to run around.

More recently, his pain became even more obvious as he started to scream when his back would spasm suddenly. These screaming sessions could last for quite a while. Finally, last night, as Liz sat with Bentley in the wee hours of the morning working through his latest spasm, the decision was made.